ArtBox artist, Dirk Guidry, is working on a new commissioned mural for the recently remodeled Lafayette, Wyndham Garden Hotel on Pinhook. Painting directly on the walls of the hotel’s restaurant, Guidry visually describes a quintessential Louisiana bayou scene in his unique style. We got a chance to sit down with Guidry and discuss his most recent commission and it’s importance for the hotel’s Grand Re-Opening on October 1st.

Growing up in Galliano, Louisiana, Guidry recalls his youth near Bayou Lafourche and the influence it has had on his work. Speaking about the mural, he says that the scene is “very close to home.” Referencing the freshness and purity of the Bayou Lafourche area and his experience of it. The mural depicts a painterly interpretation of shrimp boats docked after a day at sea.

When Guidry spoke about his subject matter, he recalls the raw nature of the area, telling a story about purchasing seafood right from the boats on which it was caught. “It doesn’t get much fresher than that,” he says.

The righthand side of the mural’s composition features a pelican. When we asked about it, Guidry replied with a vivid memory.

“I wanted to make sure to throw a pelican in there, just because that was one of my favorite times of the year… the pelicans would migrate down and they would just fill up the bayou. They’d fill up the docks. As you’re driving down highway 1, they would be flying right along side you over the bayou.” 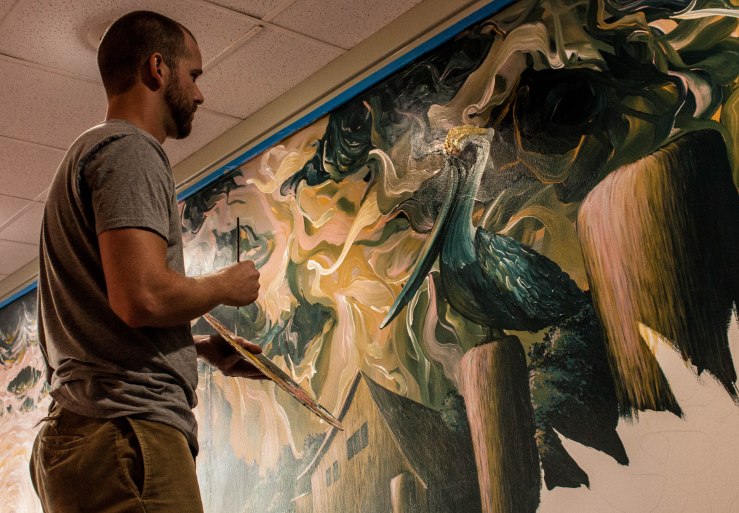 Much like the pelicans he vividly recalls, Guidry migrated to Lafayette in 2005, attending the University of Louisiana at Lafayette. It was a “nice change” he said of the area. Noting that even though this area is different, it is almost the same. “I still felt at home” he said. Initially concentrating in computer animation, Guidry recalls his journey to an eventual concentration in painting as a thirst to experience the tactility of a medium, as opposed to the clicking and rendering in computer animation. Regarding painting, he said, “I fell in love with the process of painting, the process of getting my hands dirty. I missed washing my hands after my drawing classes and watching the sink turn black…”

When asked if he considers himself a public artist, he mentioned that he finds a nice middle ground between his commissions and his visual style. Though he prefers creating large scale abstracts, he says, “I don’t get bogged down on [abstraction]… I like to put my talents to use, whether it be in portraiture, landscape, or abstracts.” In the hotel’s mural, he was given full flexibility to incorporate his characteristic brushwork in the piece. “I’m proud to say it’s me,” he says of the work.

Guidry says that he prefers not to conceptualize his work, he would rather the work speak for itself. When describing his abstracts he says, “I don’t know what I’m painting a lot of the time in my abstract pieces. It’s just me painting. It’s me and the paint… and emotions… strong emotions.” Talking about his journey as a painter, he says he often thinks in retrospect:

“Looking back at some of my early paintings…you can tell that through the trials my color just started to work as I did it. The more I practiced. I’ve been told I have a very signature application, and when people see it, they recognize, ‘That’s Dirk.’”

With regard to his body of work, Guidry makes reference to the journey of painting, not just in one piece of work, but overarching. “[Painting] is a big process, and I like where it’s going,” he says.